One of the signs of a good video game is how quickly you can forget you are using a controller or keyboard to move around in the game’s world. There is nothing like the immersive feeling of living inside the magic of a well rendered environment. I’m mostly thinking about 3D games, but I’m sure that people really into a 2D game, (think space invaders or pac-man – where all the movement is with in two dimensions, up/down & left/right,) also soon realize that the the thought, “go there” doesn’t include a specific command to a finger, you just go there.

It helps that most games use the same keys or buttons to make similar things happen. Such as moving forward. Usually on a keyboard you use the ‘W’ key to move forward.  On a controller, you push the left hand toggle forward.  Doesn’t matter who makes the game – if they want people to feel comfortable moving around in the world they’ll stick to what players already know.

But for people new to gaming, it is hard to remember what to push when. And that is, I think, what keeps a lot of people away from video games. If you didn’t learn when you were five, when your mind, in its most absorptive state, memorized a hundred new things a day without even trying, controlling an avatar for the first time can almost induce motion sickness. 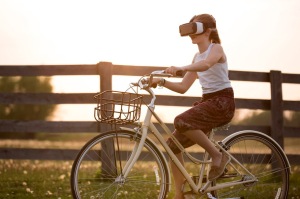 But in the end, it is just muscle memory. Like riding a bike. When you learn to ride a bike, or when you are back on one for the first time in a decade, it seems all you can do to just stay upright. Feet pedal, hands stear, spine balances. But soon, you are just riding. Your body just does it.

Like everything else in life, riding a bike, controlling an avatar…  it takes practice to get to the point where you stop looking at your fingers and just enjoy the sights and sounds.

I wish there was a way that people who have never played in a 3D environment could experience the immersiveness of a beautiful game, without the steep learning curve. I think Virtual Reality will get us there eventually, but in the meantime, there are a lot of people missing out on the magic.