These are my walking shoes, and here is the story of how I came to own them….

A long time ago, in a previous life when I had a husband who had a huge extended family and none of them hated me yet, I was friends with one of his cousins. She and I were really close until she started dating the man who became her husband. He and I never really got on too well.

No meanness ever passed between us, just a lot of confused looks. He was one of those people who never made a lick of sense to me. He was just so… nice. Not creepy-nice, or syrupy-sweet nice, more like 1950’s television nice. Aw Shucks nice. He didn’t drink, didn’t smoke, and didn’t eat meat, all things my friend had once done, with relish. Almost over night, she focused in on him and she stopped being fun, started being nice, like him, and we lost all the things we’d had in common.

Anyway… many years after they married, her husband and I briefly shared running as a hobby. Though, hobby is probably to mild a word to describe anything he did. He was the type to get obsessed with things. He knew everything there was to know about running and all the equipment necessary to fully experience all the pleasure one could squeeze out of it. (yes, of course he ran marathons, did you have to ask?) It was truly just a hobby for me, and a short lived one at that. Really, I was more of a jogger at heart.

He offered to take me to his favorite shoe store and help me pick out a pair of shoes, and for reasons I can’t even fathom, I agreed. So the two of us went to the store. Alone. Take any awkward situation you’ve ever been in with another person and times it by 11. We both really tried to find things to talk about, but it’s like talking to someone in a language you’ve just learned. Once you get beyond your health and the weather, you just run out of words that you both know. That car ride lasted at least a week.

When we finally got to the store, he introduced his running buddies, then left me to their salesperson devices while he shopped for himself. (It was a relief, actually.) The sales person figured out that I wasn’t as much a runner as a fast walker and sold me these instead of one of the really fancy and expensive pairs my friend’s husband had been talking about before we got there.

Eventually he drove me home and neither of us ever acted on our promises to go run together someday. Then I lost all of those people in the divorce and that was that.

Regardless, these are really good shoes.

Here’s a bunch of ten minute sketches I did for some random prompts… (panda, gun, anime, toolbox)

Just to trick myself into feeling like I did something today.

I picked a face and I drew it three times.  It is the same person, despite the fact that the three drawings looks so different from each other.  Sigh.  Just when I think, this art stuff is as easy as rolling down a hill, I smash into a wall. 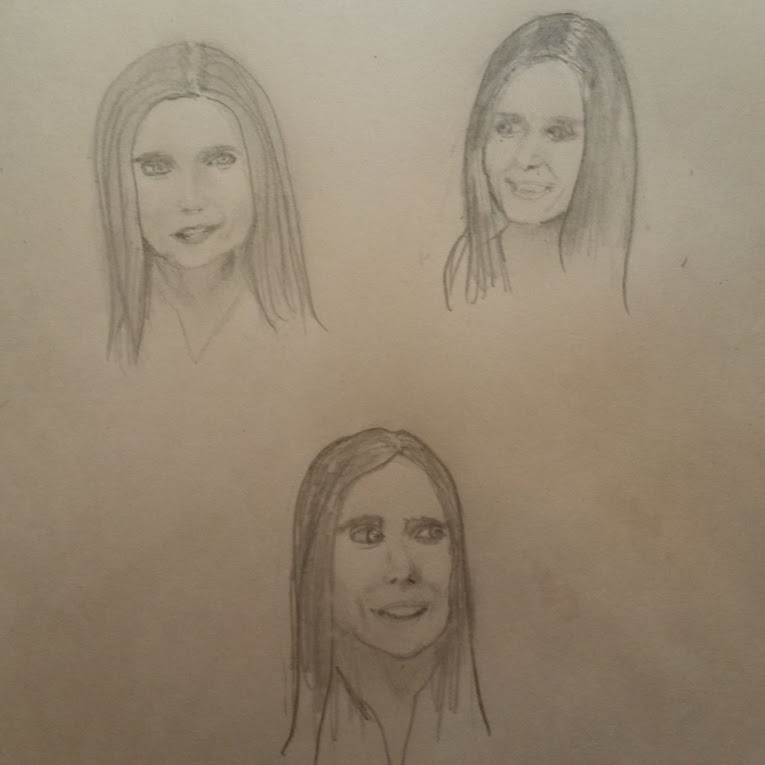 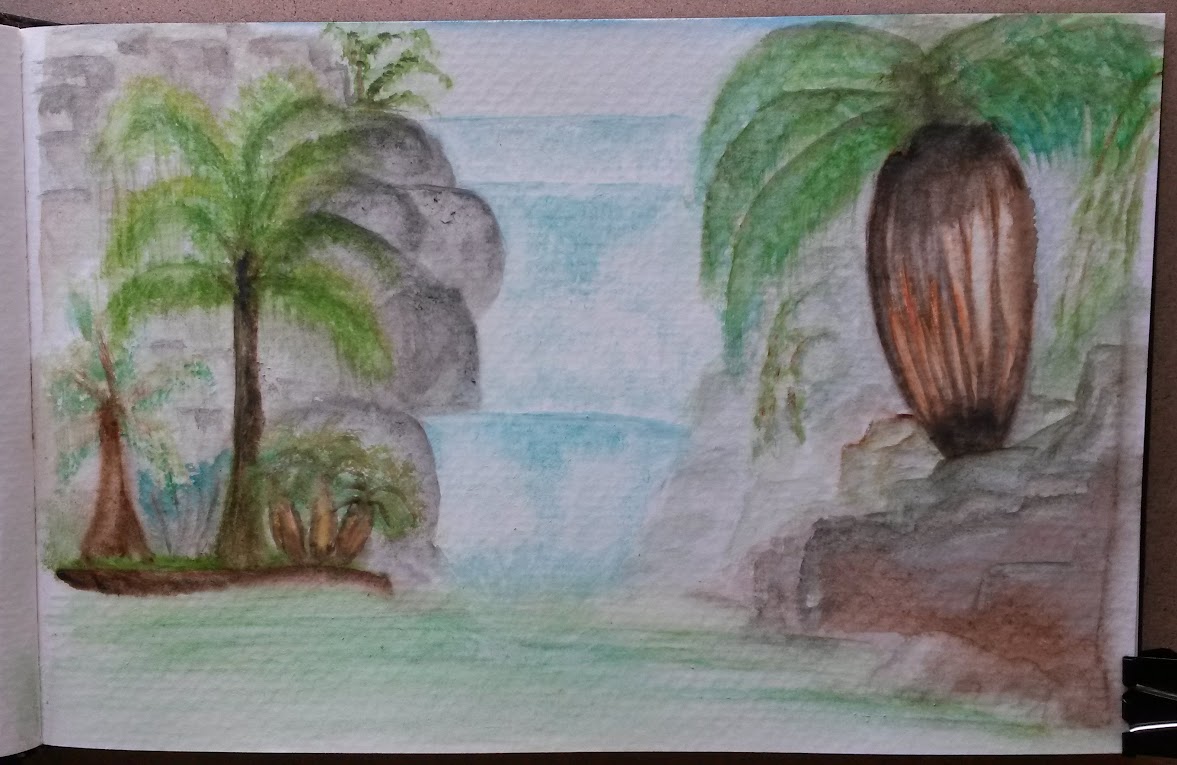 Why shoes?
Because they are there and I need something to paint.
Still lifes of dishes and such are odd. They lack something. A story perhaps. All of my shoes have stories. It’s true. Shoes are one of those things that I have to buy on purpose. Not like the half gallon of milk I buy over and over again. Or batteries. Or even jeans. Shoes are deliberate. I have to go to a shoe store and try on many pairs and deliberate size and color and style. So much thought goes into every purchase.

There are shoes I love and shoes I hate. Shoes I didn’t even buy for myself. Shoes I’ve only worn once or twice. There’s one pair I’ve put on a million times, but never ended up actually wearing for more than a minute or two. They never seem to fit with what I’m wearing. 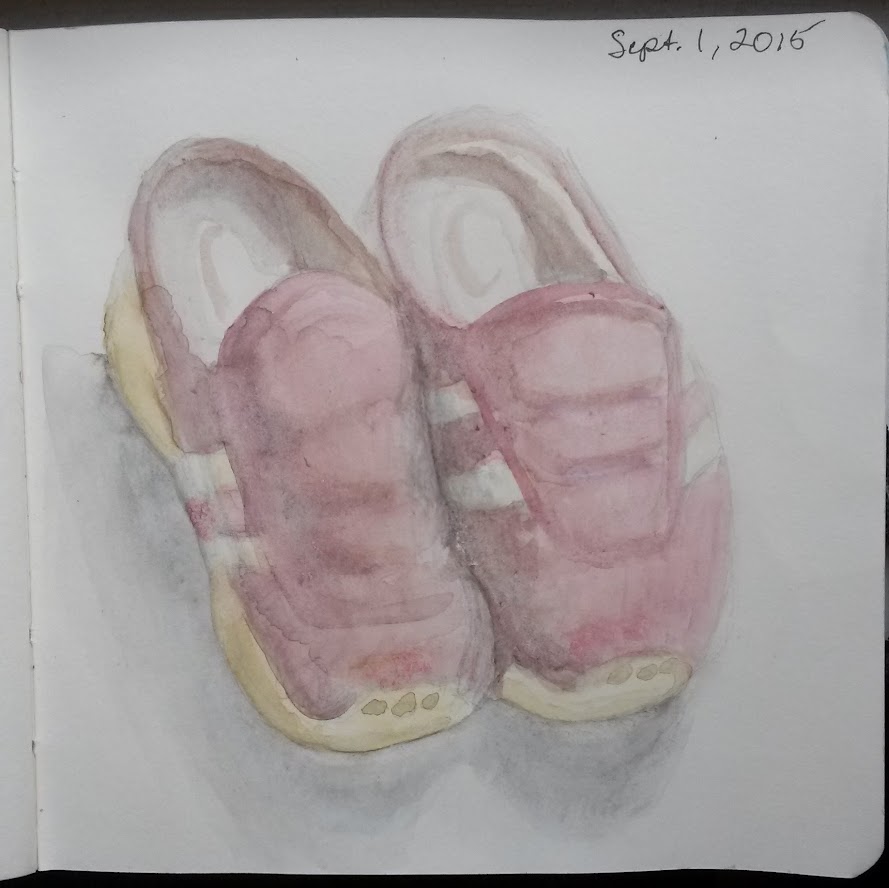 These are my red slip-on sneakers. Super comfortable, and very worn out. The label inside is on the verge of falling off, but it still clearly says ‘Steve Madden.’

I have a love/hate relationship with this particular pair. I’ve had them going on ten years I’m sure, and they were not well received by those who voiced an opinion on my clothing at the time. I don’t actually remember buying them, but it was probably one of the few times I shopped on my own. I bought them for comfort and because they are red. I don’t like white sneakers. Never have. There just so.. white… bright… glowing… There’s nothing more noticeable than a brand new pair of bright white sneakers.

These are awesome because they are no fuss with thick padded soles. They protect my toes and I can wear them without socks when my feet are hot, which they often are. The hate comes from the fear that they are terribly ‘uncool.’

I could go on and on about these shoes, all of my shoes actually.

So many shoes, and every pair a story.